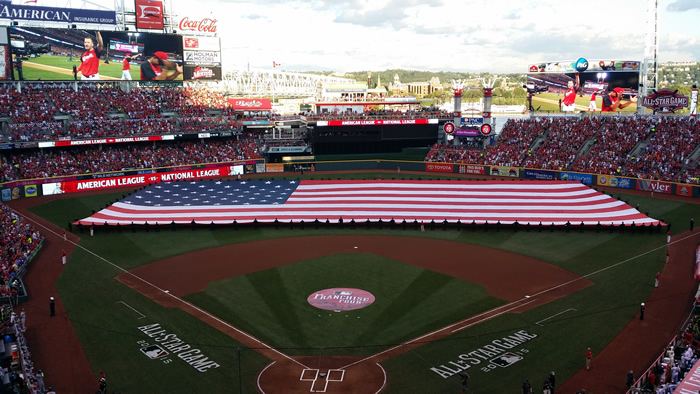 What makes the MLB All-Star Game unique, in comparison to the all-star games of other sports, is the level of competition. Although it’s a great spectacle to see the best players on the field together, it’s more than just a showcase; the players play with greater intensity, thanks to a combination of tradition, a comparatively lower likelihood of injury, and the fact that home-field advantage in the World Series is on the line.

This combination of talent and effort leads to some great matchups and excellent individual performances. Here are my top five performances from the 2015 All-Star Game:

5. Zack Greinke – Despite giving up a leadoff home run to Mike Trout, Greinke recovered to strike out four AL batters over two innings, giving up no additional hits.  His four strikeouts were the most in an ASG since Pedro Martinez struck out five in 1999.

4. Ned Yost – It’s true that managers don’t play the game, but AL skipper Ned Yost did a slightly better job of putting his team in position to win. With one out in the sixth inning, he replaced Tampa Bay starter Chris Archer (who in his second inning of work had given up a leadoff home run to Andrew McCutchen) with Baltimore closer Zach Britton, and after that used a combination of three relievers to finish out the game. By contrast, NL manager Bruce Bochy allowed each pitcher to finish their inning (or two, in the case of Zack Greinke), failing to prevent a second run from scoring in both the 5th and 7th innings, effectively putting the game out of reach. But more importantly, Yost kept Mike Trout in the game longer than any other starter, allowing him to bat four times, the most in an ASG since 2007.

3. Aroldis Chapman – The Cincinnati flamethrower has dialed it back over the last few years, often mixing in an occasional off-speed pitch to complement a triple-digit fastball. To the home crowd’s delight, and to the amazement of many AL foes who hadn’t seen him in person, Chapman threw nothing but heat when he was called upon to pitch the ninth inning, reaching 100mph on 12 of his 14 pitches, with two reaching 103. He struck out the side.

2. Jacob deGrom – The New York Mets right-hander made even quicker work of the three batters he faced in the sixth inning, striking them out on a total of 10 pitches. All three batters struck out swinging, and none made contact.

1. Mike Trout – With Derek Jeter now enjoying retirement, Trout’s performance further solidified his status as the face of Baseball. Although he started the game with a leadoff home run that might have been an out or a double for many other players, even more impressive was what he did in the fifth inning that ultimately helped the AL score two runs. After Kansas City’s Alcides Escobar led off the inning with a single, Trout hit into what should have been a routine double-play, but he beat the throw to first:

After Manny Machado’s flyout, both runs were scored with two outs, and the AL never looked back. The next inning, Yost finally removed him after walking, with pinch-runner Brock Holt eventually scoring. Trout finished the game 1-for-3 with a walk, but five of the AL’s six runs were scored during innings in which he reached base.